We still miss him 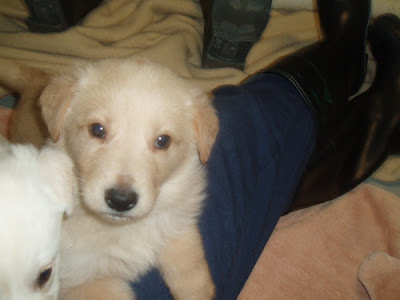 Juno and her brother, Valentine. I suppose by the time I see her next, she'll be bigger. I think I'm going to have to go visit her really soon. A baby girl - with fur - close enough.
**SPOILER ALERT** Okay, who told me to see Marley and Me?! I bawled my head off, the scene where they **SPOILER ALERT** bring him in to be put to sleep? It was awful! I almost ran out of the room but I kept telling myself that it was just a movie, calm down - but having been there, it was completely accurate! Hubby and I were a mess. I only put it on because I thought it was a lighthearted comedy! A miscarriage, 4 positive pee sticks, 3 kids later, and a death scene for the dog, yeah, great. I have to admit, I must be in a good place because I could not have watched this 2 months ago. It did remind me of all the good times we had with Samps, he wasn't nearly the furniture destroyer like Marley. He was a calm and peaceful dog who loved running in the woods. Small saplings didn't stand a chance, but the couch was safe. Truly, like the film, our family started with him. He never got to welcome a child as part of his pack. Sad, but true. We poured love into him and he gave it back threefold. I thought about all the good times we shared down at dog beach, his joy of running into the water, picnics at Spanish Banks, even his fear of storms. Omg, I am never watching that movie again.
DH took me to the Sampson tree. It was on a trail that I've never been to. Figures. I would never think of walking there. Well, any safety conscious woman would never walk there. It's not part of the regular trail system. You have to cross fallen trees and makeshift bridges to cross over mucky pools. Root laden and overgrown paths, old makeshift shelters used by whomever. But hubby and his buddy and the dogs would hang out and smoke and discuss man things. He showed me how his friend climbed on top of his shoulders to put up the plaque, told me how Sampson, Moose and Charlie would play. Man, we both miss that dog so bloody much. Now Samps wouldn't have been overly fond of Juno and her sharp puppy teeth, but he would have loved and protected her anyway. He always stuck up for the little guy.
Juno has come at the right time for us. We'll get to experience the times we never had with Big Boy. DH will get to use his Cesar Milan tricks and we'll fight about leash or no leash. We should expect a human baby really soon cause that would be our luck, hubby says. Fine by me.
Posted by Deathstar at 9:13 AM

I read the book (marley and me) and that was torture enough, no way could I watch the movie.

Juno is so adorable...and lucky :)

I remember when my parents called to say they were having to put our Scottish Terrier - Poodle mix to sleep. We had raised her since I was in 4th grade. I was heartbroken! One of my first experiences with real grief.

I've had two dogs since and had to put them both to sleep. It makes my heart hurt just thinking about it. I was very close to those two sweet souls.

A puppy is a brand new life, a new friend and someone to love and be loved. Your new puppy is adorable. Enjoy all of the puppy moments!

OH NO -- Marley & Me..nononononoo....I refused to see it because I knew it would just destroy me --regardless of how wonderful the rest of it might be...

I can't wait to hear about Juno's arrival into your life...better hide those Manolos!

I'm sorry your missing your Big Boy, but I think it's great your at a point where you can open your hearts to Juno. Ahhh puppy fur and puppy breath. Good times to come!

I'm hoping that it is exactly your luck to get a human baby right away, too. One bald one and one furry one - perfect!

I bawled in that movie, too. It was a lot sadder than I thought it would be, but I kind of liked that. I guess because I was prepared and knew about the miscarriage and the kids and the dog at the end. It's a rare thing to see real life sadness in Hollywood movies like that.

When does Juno come home with you?

(Thanks for the heads up on the movie. I was considering seeing it, but I'll pass. I've lost too many animals in the last few years and I'd rather not revisit those feelings.)

oh my, who the fuck told you to see that movie? I think *they* need to be put down.

you know one of the reasons we are waiting so long for a new pup is because of how much it still hurts to miss our old girl. as that pain subsides a bit more, I think M will soften to the idea (again). for now we will just have to get our puppy love from other sources. and live vicariously through you.

so when can you bring her home?!!?

I refuse to see that movie. No matter how many dogs enter your life and are loved and spoiled and become a part of your family Sampson will always be king. I know what it's like to put a dog to sleep and years later Rusty is still mentioned in hushed and reverant tones in our house. I see you've written more stuff so I need to keep reading......