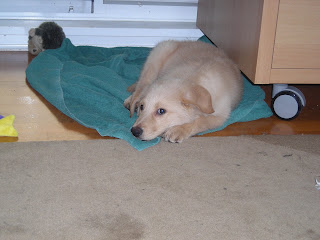 DH's surprise laser tag party went great! My friend showed up to puppysit, and DH, his brother (who was in town for a visit) headed out. We had to have a couple of Red Bulls, we were exhausted. Then I gave hubby driving instructions as went went along. Then he saw the laser tag sign and a bunch of his friends in the parking lot. He was really surprised! We all had a really great time running around in the dark, trying to shoot each other. There was another birthday party (of real kids) and they were pinging us off all over the place, and since they were all about 4 ft tall, you could barely see them unless you looked down! The little buggers, they could hide really well. Apparently playing video games makes you quite accurate. Later, after the DQ ice cream cake and pizza, we went to a nearby pub for a drink. I was so happy to see DH laugh and have so much, he was really touched by my efforts.
All in all, a very successful weekend. In 3 days, we have have figured out how to get Juno to eliminate outside with consistency. We finally remembered to pick up her water bowl after 30 minutes at meal times and no more water after 7pm. She hates it and I feel badly cause I know she is used to ready access to water but it works. (I'm sure we'll cave on that one.) Second task was to get her to sleep soundly at night without putting up a racket. We decided to bring her kennel into the bedroom hoping that if we were in the same room, she would settle down quickly. She started to cry when we locked her in but she stopped in 45 seconds and slept for 4 1/2 hrs quietly. I woke up hubby to take her out for a pee and when he brought her back in, she went back to sleep - quietly! Victory!
DH's brother leaves tonight and then hubby goes back to work tomorrow and then it's Juno and me time. I think I've got the unshowered, in my sweats, messy hair new mum look down pat.
PS. Congratulations to all those Sun Runners! I hope you 10K run was very successful.
Posted by Deathstar at 9:31 AM

YAY JUNO! (I think that with love and consistency, you will have a wonderful pup there :)

Laser tag is a blast. I have only gone once, and was exhausted and sweaty by the end, but it was surprisingly enjoyable "killing" husband ;0

Yay! So glad it's going well! & that the birthday party was a success!

That b-day party sounds like it was a blast - I'm glad DH really enjoyed it and appreciated your efforts.

Puppy love, such a good thing!

Laser tag sounds fun, I used to play when I was a teen,but never went to a park. Great idea for a party- glad DH enjoyed his day!

It sounds like the perfect puppy welcome home weekend!

what an adorable puppy.... i luv him.

So glad the party went well...hope the little guy is getting the hang of the whole elimination thing!