Easier than a kid 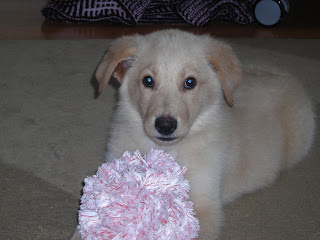 Another ICLW for the month of April and I've included a link above for the quick lowdown. I've been blogging about my new puppy a lot cause, well, I don't have a kid and smell of a puppy is better than baby poo. Sort of. In retrospect, I should have had one of those ticker things for Juno. Hah!
We've been getting more birthmother profiles, mainly inappropriate for us, but we're getting them, so it's just a waiting game at this point. I saw one the other day that really had me scratching my head. These parents already had children and were looking to place this last one. Mmm. I assume this choice is out of financial necessity, but that's so sad. How does one explain to a child that his parents kept the other children but not him? Does it really matter? I don't know. We get so little information, a few sentences really. And then we put our name in the hat and wait.
I'm looking at cribs now, change tables and the like. The 2nd bedroom is starting to feel like it might actually hold a child. I can barely manage a puppy and my mother in the same room. My sister called in the middle of me making dietetic apple crumble for my mum, watching the dog and while I was listening to her, mum was up and down getting into all sorts of things, hubby is narrating her every move, trying to throw her spit on the floor, hovering over me wanting to speak to her and finally I had to cut the conversations short. Oooh, like every woman I've ever talked to who had become a mother! Man, I look forward to cutting heartfelt and important conversations off! Do you know how many times I've been in the middle of some heart rending story with a friend who "had to go now"?! I totally understand they don't have that kind of time anymore, but honestly. Will I be any different? Mmm, only to infertiles. So there.
The constant getting up and down in the night for the puppy is giving me a clue as to how tired I'm apt to be. How in the hell do women carry on their careers, I have no idea. Particularly self employed women who don't have an office to go to. I was a feeling a little trapped just hanging out with the puppy at home. She won't be getting her 2nd series of shots for a while and I'm not supposed to go to dog parks and the like. In this city, it's hard to avoid other dogs, since there are a LOT of dogs in our neighbourhood and I don't have a backyard. So Juno and I have been hanging out at the green spot next to this restaurant and the Bikram's studio next door. Just getting used to the noise of the city. I'm going to be planning a litter for her on the patio, I'm about done with the trips outside at 4am in my jammies.
Posted by Deathstar at 3:27 PM

Look at that sweet face! It makes me want to lay on the couch and have a nap with a puppy snuggled up. I may add that to my list of things to do after work ;)

Boy is she adorable...though I can see how the 4am runs get less adorable...Lucy still wakes me sometimes in the middle of the night -- I hear her nails on the floor -- (she sleeps with us) and then before I know it I'm letting her out at 1am. She is, I'm afraid, a spoiled girl. I wish we'd had her at Juno's age so she could have been properly socialized with other dogs -- we can't really go to dog parks because of the possibility of a dog-tangle...

I'm always on edge with new things that change my routine...it always feels like too much to handle for awhile until I rewire myself...for me its fear I think, and once I get through that... I can breathe again.

I'm so excited to hear all the stirrings in your place...it sounds like doors are opening!

Reading about your new family addition and the one you are anticipating is exciting. You are so thoughtful about each.

I posted a tarot card for Intuitive Tuesday yesterday that I think may tap into what you might be feeling now about Juno and about waiting for the adoption.

She is so ridiculously cute! I just want to come over and give her the biggest cuddle! Are you ever going to get tired of people stopping you in the street squealing with delight at her fuzzy adorable face? I'm just assuming they do, cause that's what I do every time I see a puppy. And you know, the whole world is exactly like me.

But she is just so damn adorable! I'm glad things are going well with Juno. Have a beautiful day, my friend.
Happy ICLW!

The 2 adoption situations we were chosen for, one being Little Lassie, was for families that had (and were raising) other children. It worries me how I'm going to explain that to LL, but we'll muddle through it together.

Thanks much for the visit. My, you have a lot going on at your house right now! Hope everything moves along well so you get to put that 2nd bedroom to its best use SOON.

I know the feeling of wondering HOW women continue careers after baby -- shoot, I can't even handle the added pressure of ICLW :), and I work for myself!

Meant to add: That puppy is heartbreakingly beautiful!