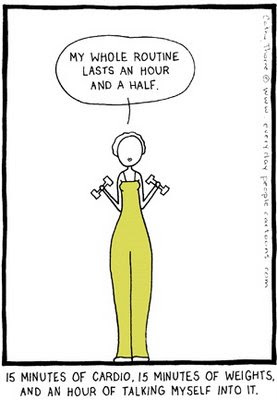 With all the newly pregnant bloggers out there who spent their winters fornicating and exercising instead of overeating on their couches, here's an article you might find interesting. I just started going back to the gym yesterday as I realized that refusing to leave the house and eating as entertainment was only going to result in disaster on so many levels.
Why was I refusing to leave the house? Well, it wasn't a conscious decision, I just fell out of the habit. No dog to walk through the monsoon season. My favourite spinning instructor has moved on, boring aerobic classes, no one to work out with, I could give you all sorts of really good excuses. Nothing better than the "I just don't feel like it" one though. Strangely, I've had more auditions and gigs when I was heavier. I am not amused at the irony. Everyone in my industry obsesses about weight and when I finally lose weight, nothing, bupkiss.
Hubby has started going to the gym later on during the day but he's no fun to work out with - I have to do aerobic stuff in order to just maintain my weight and go hungry when I want to lose weight. He just does weights in the manly pit of huge dumbbells. I sweat a lot which requires me to build in shower and maintenance time post workout. He's in and out in an hour. No hair, no fuss. It's finally occurred to him that he can't shove massive amounts of chocolate into his middle aged belly anymore with impunity. He's asked me if we could just eat non-processed food. Huh? I checked for pods. (I think he wants to go on a diet, but he's not going to say the word.) When you pop the lid off a can of Pringles, that's close to fresh, right?
Sounds like fun to me! Since I do all of the cooking, he has no idea how much time it takes to plan and cook from scratch. When I was on a naturopathic diet (to improve my fertile state - hah!), I eliminated soy (cause of my fibroids), wheat, dairy, sugar, etc. and that meant cooking from scratch cause soy is in a lot of things. Conclusion: I became a nervous wreck who was always wondering where my next twig, nut and rice meal was coming from. I lost NO weight for all my troubles though my digestion vastly improved. I also learned how much unnecessary ingredients and chemicals there was in processed food. Shopping has to be done more frequently and you have to plan carefully or you end up spending a fortune. All those expensive organic salads go bad if you actually leave it in the fridge and don't eat it cause you're sick of salad. I'm not sure if hubby realizes there are other food groups other than meat and potatoes.
It's a great idea for the both of us, but if that's what he wants, he is going to do more than just eat. He can pick up stuff on his way home from work and since he's on foot, that shouldn't be too hard. No more asking me to bring home food or "treats". Lucky for us, though we have 7-11 and Dairy Queen right around the corner, we also live next door to Whole (of your paycheque)Foods and a couple green grocers. He's going to have to learn how to pick ripe fruit and how much is too much per pound. He once bought a $9 bunch of green grapes from Safeway. And refused to put it back. He has to learn to check out Urban Fare on a regular basis at the end of the day to see if there are cheap packages of fancy ass cuts of steak, which green grocer has the cheapest vs. fresher produce. You can get certain things on special at Whole Foods or Safeway but forget about affordable produce or meat.
But of course, if it keeps raining, I may need to finish off my frozen pizza first.....
Posted by Deathstar at 9:15 AM

I hope he realizes how much work it is to eat like that. I really wish i could do that, I think I need someone to teach me how to shop. Coming to Oregon anytime soon, perhaps? Exercising is a pain in the butt for women! My husband stopped drinking soda and "lost" half his belly. I work out for an hour a day and NOTHING happens. Not to mention the smaller portions, no soda, no fast food and everything else I've given up. NO FAIR, I say!

Thanks for your kind words on my blog.

I'm a lurker out here, and have just recently started trying to reach out to other people like me.
It helps to know that you aren't alone.

I do feel like i'm losing myself, and i've been trying very hard to get me back.

And I hear you on the dieting, I've been trying SO hard to eat better and work out, but where do people find the time to workout everyday!

Ahh, yes. Cooking from scratch. At least it's balanced in my house in that I'm the one who wants to eat that way, I'm the one who knows how, and I do the cooking for the most part. But we do succumb to frozen pizza and fish sticks and take-out quite often. I find that making a meal plan really helps - takes the thinking out of it at the end of the day. I sit down once a week and make a list of suppers, and then buy the main ingredients for them when I shop. It's a little trickier when you have better access to fresh fruits and veggies as you do out there and you just want to go with whatever's freshest and cheapest. Still do-able, probably, but harder when you don't have everything you need in the house.

I was laughing at myself today when I discovered that what I wrote about our meeting in my last post was almost identical to what you wrote a few weeks back. I wasn't intentionally plagiarizing, I swear!