It falls on a Tuesday this year, which is a bit awkward for those folks who had to work on Monday and then get Tuesday off and then back to work on Wednesday. But I'm an unemployed actress, so it's all the same to me.
I did have a great audition for a feature film on the weekend with an out of town casting director. It was for a lead so it was great fun preparing for it. Real character work for a change. Not just - "he went that way, sir." The casting director complimented me, telling me how talented I was. That's so nice, but being a veteran of this business, I take it with a grain of salt. I've heard that before but the validating part comes when you win the role. So give me the part, dammit!
Speaking of getting parts, my husband just got an actor role on Supernatural. Did I tell you he wanted to get into the business at one point? Well, he's with my agent, but he hardly ever goes out because he has a real job and is often quite busy or out of town. But when he does go out, he has a good booking rate. He had an audition, rather a meet and greet with the casting director and director, and now he gets a part playing a short order cook. He has no lines but he has to wear prosthetics (like demon eyes) or something. And it pays really well. Isn't that great? Grrr. He actually came home and bragged he was a shoo-in. I was on the show as a bus clerk a couple of years ago and I had a few lines, but I had to audition against half a dozen women! He gets a meet and greet with 2 other guys. I have to chant for hours, sacrifice a baby goat and send flat screen TVs to the casting director to get a part and he just shows up. Ah, that's show business for ya. Well, I'll just have to pick out a very expensive dress to get for the wedding in Europe. Oh, come here, WALLET, I mean sweetie.
I joined a bootcamp program for the next 4 weeks. I stopped going to Weight Watchers and took the money I would have used for that and put it towards physical activities. Now I know WW does really work, you count your points and do the program, but I think I just got tired of counting points and I just wanted to eat whatever I wanted. Which meant of course, that I stopped losing weight and even gained a few pounds. This means that I was not getting it - it's not a diet, it's a lifestyle. As much as I would like to eat cinnamon roles and candy every day and wash it down with a pint of booze, I can't. I am not like my hollow legged size 2 friends. Time to bump it up. I also bought a scale. Fuck. I've never owned a scale. Now I know why. You get one at one point and it's yay time and then you get on later and it's uh-oh. What the fuck?
I've been to 2 classes so far. Every part of my body hurts, I ache all over. Do you know what a bear crawl is? A seriously fucked up way to move the human body along ledges. I was late the first day and the class had to do 10 pushups. They love me. I can only do the knee ones, but I volunteered to do an extra 10 for the older lady. She really didn't need any further pity, as she left me in the dust. I ended being the straggler of the group. It was like, what are we doing now? Wait, wait, go backwards???
My lovely hubby also bought us bikes this weekend. The bike is my birthday present. 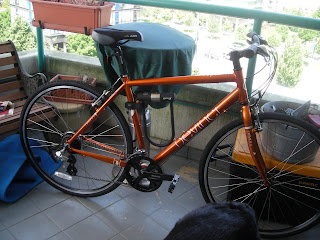 Gorgeous, eh? (that's Samps near the bottom of the frame, moving out of camera range.) No, it's not one of those very popular cruiser types. No nancy bike for me, folks! They're nice, but it's like riding in a chair with wheels. I prefer hybrid bikes. I like the real dangerous, fast ones, there's a possibility that your brakes could throw you over the handlebars, the pedals can rip up the back of your legs if your foot slips off, grrrrr. Of course the downside is your ass is not too comfortable on those seats. All the spinning prepared me, though, I still swapped out for a cushier gel seat. My ass would have liked the big comfort seats but it didn't match the edgy bike. We already gone around the Stanley Park seawall twice. It's 10km, people. I haven't done that since 19mumblesomething.

It was lovely actually, the sunset was great, the crowds are out, the gelato store is open late .... oops, this isn't going to be easy.

Posted by Deathstar at 9:46 AM

I hope you get the part!!

Congrats on joining a bootcamp program. I've seriously considered it recently for myself. I can't wait to hear more about your experiences in the program. YAY U!!

Happy Canada Day! I hope the audition works out... & that the aches & pains of bootcamp subside. Three of the 20-somethings in my office signed up for one together... they got a discount if they got friends to sign up... now two of them aren't talking to the one who persuaded them to sign up, lol. I still go to WW, but I agree, even when I'm really "good" about the food, I need the exercise to kickstart the metabolism. Sigh.

Oh! You reminded me about my trip to Toronto with a friend a few years ago and we were there on Canada Day! What fun! And I think I remember something about leases being up and people moving like crazy. Anyway, we just thought Canadians were so friendly and had a great time on our trip there.

I swapped out my mountain bike seat for a cushy gel seat too. the other one hurt my fat ass too much. hey, anything to get me on there, right?

last time we were in vancouver (love it there!) we rented bikes and cruised stanley park and the seawall. beautiful! I am way more likely to use a bike than a gym membership. though my big booty needs all the motion it can get these days...