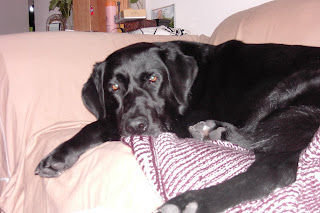 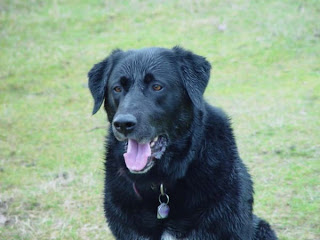 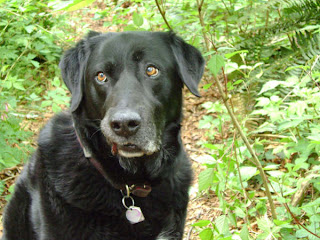 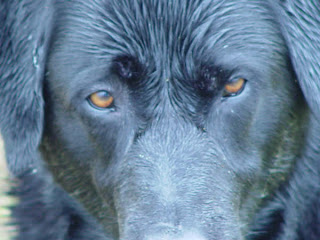 Today, my dog died. He was laying in the back office, when I heard his nails skittering on the hardwood. I went to find out what he was up to, fully expecting to find him trying to catch a fly or something. He was spread out on the floor, rapidly breathing, eyes dilated and not seeing me. I called my husband immediately. I had no idea what to do. I quickly cleaned up a bit of dog poo, I thought he had had a seizure of some sort, and then I tried to rouse him from his stupor. He was not responding. I called my husband and told him to hurry. I placed him on a blanket and dragged him to the elevator. My husband arrived shortly, he ran all the way home. We took him to the veterinary hospital, they took him right away and eventually the vet told us that he most likely had a cancerous tumour that had burst on his spleen. Internal bleeding. The x-rays confirmed this and we were left to decide as to what measures to take next. Stabilize him by transfusion and then surgery at a specialist's office in Burnaby. My husband went to call his friend to have him bring his dog down as there was no blood available at the dog blood bank. Two minutes later, the vet rushed back in and said that Sampson was not going to make it. We ran in to his side. I put my hand on his neck and he placed his paw around my wrist, gasping for air. We made the decision to euthanize and that was that. We spoke to him, nuzzled him and told him that mummy and daddy loved him so much, he was a good dog. I chanted as much as I could. And then he was gone. I had to be dragged away from him. I collapsed outside, sobbing.

We loved him so much.

Posted by Deathstar at 7:05 PM

Oh honey, I am so, so sorry - and for it to be so sudden! My thoughts are with you on this devastating day.

oh I am so so sorry. I am bawling my eyes out here. I know that awful feeling of losing your best friend so suddenly. they are such incredible faithful companions, loving us unconditionally like no other. this sorrow is the price we inevitably pay for opening our hearts to their love. I know sampson must have had a very happy life with you. I'm so sorry.

I am de-lurking because I want you to know how truly, deeply sorry I am for your loss. I believe that animals have souls and that we will meet them again. Again, I am so sorry.

Oh. I have tears in my eyes here. I am so, so terribly sorry. Those words don't to this feeling justice -- I wish I could be there to offer comfort in person.

Oh. I have tears in my eyes here. I am so, so terribly sorry. Those words don't to this feeling justice -- I wish I could be there to offer comfort in person.

I am so very sorry about the loss of your dear, dear friend.

i am very sorry to read about your tragic loss

I am so incredibly sorry, sweetie.

Sending you and Sampson warm thoughts of light and unity.

Oh Sweetie, I am so very sorry. I know what a relationship you have lost and it makes me so very heavy hearted for you.
I am so sorry you had to say goodbye to your friend. He was a beautiful boy.

I am crying with you as I know how hard it is to lose a faithful friend. I'm so sorry for your loss...take the time to grieve, and don't let anyone tell you he was "just a dog" because you know better.

OH my gosh, I'm so so sorry. I'm in tears. I'm just getting caught up and my jaw just dropped. I'm just so shocked and so sad. Thinking of you.

OH NO! I'm so sorry. I had a similar experience with my cat who went into liver failure. Another rush to the vet and a very hard decision needing to be made in seconds.
It's so hard isn't it? But you made the right choice. Don't let yourself believe otherwise. You couldn't do anything but stop his suffering. Anything else would just have been prolonging the inevitable and his pain.
You did the only thing you could - stop his suffering. And now he's in peace.
I'm tearing up right now and can't stop... I'm just so so sorry. :(

I am just so very sorry for your loss. Our pets are our children in a way, and when we lose them, the grief is horrific. I wish there was something I could do to help you.

Oh, this has me bawling... My own beloved black lab had to be euthanized 1 1/2y ago but it seems like yesterday. It hurts and I'm so sorry. Sending you plenty of hugs.

I'm crying too - I can't imagine the pain you and your husband are in right now. I don't think I would have been able to handle myself any better, given the situation...I'm so sorry!

Unbelievably sorry. What a beautiful dog.

I'm so sorry. Devastating, completely devastating to loose a fur baby. I know ...we lost our furbaby to cancer just 6 weeks ago.

The days get easier and your memories more vivid. Sampson will always be on your mind and in your heart.

You and Dh are in my thoughts and prayers.

Oh! So, so sorry. As soon as I saw his pix I just started bawling. He was gorgeous.

I know how much it hurts to lose a beloved pet. No words can make you feel better, but still...I'm so sorry for your loss.

I'm so very sorry. I wish I had something else to say. Take care of you. Hugs.

Oh, My heart dropped when I read the title to this post and I am choked up as I write this. I am so sorry for your loss. So sorry. Thanks for sharing the pictures of your beloved pet. My heart hurts for you.

I'm over from Lost and Found... You don't know me, but I had to let you know that I'm here, crying right along with you. I'm so so sorry that you lost your sweet Sampson - and at the same time, your best friend. He was obviously very loved. I'm just sorry.

Oh no. Oh hun. I have no words. I almost burst into tears reading your post. I take back the almost part - the tears are rolling as I write. I have no words, no way to comfort...except a huge hug and a shoulder.

I am so terribly sorry. I don't know you, but found you through stirrup queens. I am an animal/dog lover, and just reading about your experience broke my heart. I hope and pray that Sampson is frolicing now on the Rainbow Bridge and know that someday, you will be reunited! Hugs.

I am so very, very sorry for your loss. Hugs to you.

Oh, sweetheart! I'm so sorry. Just looking at his sweet face makes my heart break a little, knowing he's not there with you anymore. May you be granted peace and comfort as you grieve this huge loss.

I am so, so sorry. My cats are my children and as they get older, I try not to think what the end will be like.

When I read your post, I got a lump in my throat and tears sprang to my eyes. I wish there was something I could do to relieve your pain as Sampson was clearly loved so much.

You and your husband are in my thoughts.

no, No, NO!!! This is beyond explanation or words. So very, very, very sorry.

I'm so sorry for your loss.

from one dog owner/lover to another...i am so, deeply sorry. i am in tears thinking about how awful this must be for you and your DH.

I'm so sorry. Our old little dog died 10 days ago and it was unbearably difficult. It was so painful and I miss her so much. The first few days are the worst -coming home and no dog waiting to greet you. It does get better. I'm sorry for your loss.

My tears are for you and your husband as I'm so very sorry for your loss. Dogs are just as much a part of the family as any person, and anyone who says otherwise clearly has never experienced that wonderful bond.

My heart goes out to you!

I am so very sorry for you loss! I'm crying here with you as I understand how difficult this is and how much you and your husband love your little buddy. My thoughts are with you both.

I'm so very sorry about Sampson. I'm crying right now too. My sister had to put our 19 year old cat to sleep a few months ago because of cancer, and it just broke all of our hearts. I know it hurts really badly right now, but it will get better. Thank goodness you were there with him and were able to take him to the vet, and be with him as he passed.

I'm so sorry. I'm sobbing for you over here. That's so terrible, I can't even imagine. I'm so sorry.

I'm so unbelievably sorry for your loss. I read your post with my heart in my throat.....so sudden. He had a wonderful life with you, and he was dearly loved. It's so hard. My thoughts are with you both.....

I am so very sorry for your loss. I lost my sweet cat very similarly, it was so sudden and I was in shock. It took a year for the grief to lift and for me to start to feel "normal" again, although I still miss him dearly. Our pets are our family.

Oh no, so so so sorry to read about Sampson. I can't imagine how hard it must be. Please know that I am thinking of you and your husband.

Ugh, I'm so so sorry to hear that. I know how much you loved Sampson, you could read it in how you wrote about him.

Deathstar I am so sorry. Our beloved dogs love us unconditionally and ask nothing but love in return. Anyone that has ever loved their dog and lost them, knows the depth of the feelings you are having. I have sobbed in the vet parking lot more than once and it is horrid. Sampson was beautiful and had wonderful eyes. My heart goes out to you.