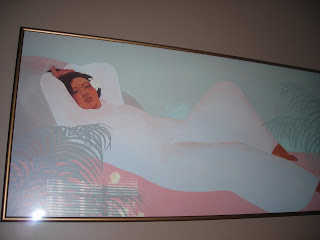 Way back in the day, when I was a swinging single living in the city, I painted my bedroom Caribbean blue and my living room dusty pink. Oh, yeah, "Miami Vice" colours. And I sponged the opposite walls. Good grief. I didn't have a lot of money but I did want some art on my walls.

There was an art store downtown that I passed a lot and I used to go in and browse. I wanted something that depicted who I wanted to be or wanted to feel. There was rarely any art that depicted black women, so I fell in love with some Pegge Hopper prints. Dark enough, I guess, they were Hawaiian women. Sometimes they had them already framed and sometimes they just had the posters. She looked so confident, so laid back. At ease with herself. Like she had just had the best sex in her life and was now just laying back in post coital bliss. Confident. I had spent all of my 20s trying to acquire this feeling of feminine power. If I did ever have it, I certainly didn't wield it. It was unconscious, untapped.

Now I knew that acquiring prints was not particularly expensive, but to me, it was, so I really did treasure each purchase. When I got together with my husband, he found them too feminine and the frames were too pastel for his taste. Unfortunately, we never could agree on what to hang on our walls, his tastes are more of the photographic and water and lighthouse sort. So she just sat on the floor forgotten. But when we moved, I dug her up, determined to put up my treasured art once again.

This has been modified somewhat - it had the name of the art gallery where it shown, Kapalua I think but when I had it reframed (the old one was dusty pink), I had it cut off and framed in a simple (read: affordable) copper frame. I still want to be here. I believe I've had my moments. So carefree. So laidback. Independent and strong. Savoring quiet moments when being me was good enough.

Posted by Deathstar at 2:37 PM

LOL at the Miami Vice colors.

I totally get what your saying. I do the same thing with music. I have songs I want my life to feel like.

That's a great print... i'm glad you kept it. I still have two Dawna Barton prints from the 80s hanging in my house (one of them in shades of dusty pink & peach). And I still like them!

I so wish I kept some of my old prints they are long gone sorry to say. I'm so glad you kept this one, she looks so relaxed and so beautiful. Congrats on your bike too, 10km, man thats alot girl!