Shoes or Behind Door No. 2

"We practice Buddhism so that we will be undefeated by even the harshest winter of suffering and be able to welcome spring in our lives." - Daisaku Ikeda

We just had our conference call with the US lawyers. I shall have to think of a suitable pseudonym for them. Hubby did most of the talking cause apparently he thinks I talk too much and he believes that less information is better than more information. Meaning I'm way too honest and open with people and he plays everything like it's a business deal. I just wanted to say hey, I've had enough, get me a baby dammit or I'm going to drown my sorrows in Manolo Blahniks! 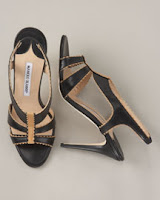 Cause nothing says infertile and loving it better than these babies!!!!

Adoption is quite an industry in the States. There's law firms, adoption agencies, counsellors, specialists, facilitators, etc. We Canadians just love to sign up with one, take a number and wait. Cause we're so polite, dontcha know. (I did contact a Canadian lawyer and after a 2 short emails, I've forwarded my profile, but haven't heard anything back. All these lawyers seem to know one another. If that's the case, then you'd think we might have been better served with all of them in on the phonecall. I bet ya they're talking about us right now. She called you too? Ohmigod, would somebody get her a kid and get her off my back?!) We had all our questions answered and they let us know where they stood.

They had an information package with everything well presented in a straightforward and detailed fashion. We also addressed the religion issue. I have to say that Americans seem to be much more religious than Canadians and much more vocal about it. Having said that, we were told that our religion (or lack thereof) would not be a barrier for the right birth mother. I guess I've never really thought that my faith as a "religion" cause as "evangelical" as it can be, it's pretty darn inclusive. And once again, being a bi-racial couple is a plus.

It was also the only time I've received positive feedback on our profile. The adoption counsellor really liked it and didn't recommend any changes! We didn't show pictures of our 4 car garage. We don't have one, but that's not the point. I thought who we were was more important to express than what toys we have. So, that was nice, since I was considering changing it a bit. I was also impressed by the counsellor's commitment to birth mothers. I'd like one of those counsellors for myself actually. How come adoptive parents don't get one? Just saying. Of course, I have all you wonderful women out there! Now I just have to get a few hard copies sent in on nice paper and all that. I have to say it feels pretty cheesy, look at us, we're great people but we can't procreate so give us yours! I'm rolling my eyes here.


Having said that, all the adoption professionals are very passionate about what they do and why they do it. They truly believe they're doing the right thing for all people concerned. And speaking for those people who desire to adopt, at least the ones I know: it's done out of sheer love as corny as that sounds. One goes from the feeling of hey, I want one of those .... to what the hell, this is a HUGE deal, I better get my act together so I don't screw with people's lives! Anything less could not give you the strength to go through this process. Years ago when we didn't really know anything about adoption, we always wanted to adopt after having one of our own. Knowing what I know NOW, mmm, yeah, I would have thrown in the towel by now. I could be singing another tune after all this is over, but I don't think so. During these hard economic times, I'm sure I would have chosen to save my resources (both emotional and financial) for other things. Just by the stories I've read along the way, there are so many deserving couples who just can't afford adoption or IVF or are so stretched by trying to meet those demands, undergo such incredible stress that all the joy gets sucked out of their lives. I know, cause I've been through it. Still going through it.


DH told me that if we don't get a match by summer, we'll go on a small vacation. As much as I would enjoy one, I can think of one thing that would be better. Any guesses on what that would be?
Posted by Deathstar at 9:00 AM

Those shoes are beautiful, BUT of course what's better then a baby?! I'm glad that things are rolling for you. Thinking of you!
*HUGS*

I'm glad you got some encouraging responses to your profile - maybe means they are the right people for you that are happy to work with you in who you are.

I find planning a vacation helps - it's distracting, and of course, I'd love to cancel it for a baby. It's the game I play with myself - if I don't plan anything, then nothing will happen/progress.

P.S. I left you an award on my blog. You deserve it! Thank you for everything.

shoes make everything a little better don't they? good luck with your adoption journey...
iclw

With an agency you do get a social worker who can be a helpful support or no help at all. Ours was great. We still keep in contact.

Your wait will not be long. Sorry that my agency was a bust.