Right at this very moment, my DH is in the 2nd bedroom. Priming the walls. For painting. A nursery. No, no, calm down, we don't have a match or anything. Last week, we decided to buy paint to cover the shockingly bright blue walls that we've been ignoring for 2 years. I was going to show you the sage green we're going to replace it with but I seem to have misplaced the paint chip. Not baby blue or pink or yellow. That would be too much like expectation. No flower or teddy bear murals. Maybe something else. Details to be decided. I have to admit, I was scared (okay, terrified) at first. To hope. To determine that this would be our year. I had done that before and well... you know. But then I think of my red shoes and though they are not the most comfy pair of shoes I have, they made me feel different. Sexy. Powerful. These are never the adjectives I use to describe myself. This will change.

So this is the colour now (primer on the left). 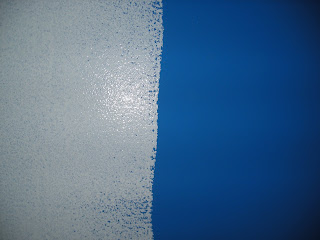 When we first started the adoption process, I was really excited and wanted to paint the room right away and hubby was like, whoah, slow down. The fallout last year sucked the wind out of our sails. Now he says let's get it done. I know this whole IF bag of hammers has cost him too. He is as frustrated as I am at the non-results we've had with adoption. It makes me sad to realize that he has lost his innocence, his optimism about this whole "family" thang. It's like a grim hope. Hoping for the best and expecting the worst. He can't quite indulge his penchant for boy toys to soothe his soul because of his concern over the crappy economy and the impending costs of adoption. I know he doesn't particularly like painting, but I suppose that if we had a bun in the oven, he would certainly feel more joy in this task. But he's moving in faith right now, I think, or perhaps he just wants to make me happy. Maybe a bit of both, I'm not sure. All of his peers have gone on to have children easily and as much as they complain to him about the rigors and responsibilities of parenthood, and as much as I'm sure he would delight in buying bigger and better TVs or travelling the globe, he takes great delight in hanging out with kids and reading bedtime stories. It's so sweet, it makes my heart melt and I don't think you can replace that with the joy of driving a new sports car. (But what the bleep do I know?) Sometimes it seems all we've been doing is struggling to find a purposeful joy. I guess that's why I continue in my Buddhist practice and keep on trying to understand life. I want to absolute happiness, not the jumping up and down kind when you win the lottery, the kind that allows me to withstand life's ups and down with grace and dignity and purpose. Life would seem hollow without it.

Besides my temper tantrums and spiritual efforts to rise above it all, I forget that he stands by and watches it all, unable to soothe my pain as well as his own.

At a Buddhist meeting, someone asked about what they could to to guarantee security in these hard times. And the vice director just laughed and said there was no such thing as security. There could only be an unshakable happiness and high life condition that could withstand the Eight winds.

"A truly wise man will not be carried away by any of the eight winds: prosperity, decline, disgrace, honor, praise, censure, suffering and pleasure. He is neither elated by prosperity nor grieved by decline. The heavenly gods will surely protect one who does not bend before the eight winds."

I was pretty pissed when I discovered that for whatever reason, that I couldn't have what I wanted when I wanted it. Princesses are like that. Frequently disappointed. Having acquired my queendom, however, I know now I have to dig deep, make sacrifices, be smart and be determined. I wear armour now and have to learn how to move forward with its weight.
Posted by Deathstar at 11:42 AM

Your last paragraph is beautiful and full of so much meaning. I love it. All we can do is continue our journey the best we know how. From where I sit, I believe you and your DH are doing a wonderful job.
Peace and hugs to you and your wonderful DH.

Let me know how many coats of paint it will take to cover that blue because it is EXACTLY the color blue that is in our small room.

I can't even blame anyone else...what the hell was I thinking?

I like that you are marching...too bad the armor is so damn heavy though!

At the very least, you get a nice freshly painted room. I'm hoping you get a lot more than that, though! xo

My husband's nickname for me is "Princess". Hmmmm....

uh, yeah. did I write this?

that is a serious blue. good for you for taking the plunge. sage green is the only color I'm committing to also.

oh, and security is just an illusion.