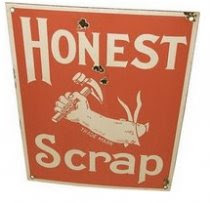 Okay, I'm only doing this cause P from bloodsigns is currently getting shots and she hates needles so I'm doing this to cheer her up. 10 things about me that you didn't already know- frankly, I'm surprised y'all don't know my bra size by now. Also, cause anacylopedia says I can.

1. I actually have 2 sisters. I rarely talk about them because one of them actually knows about this blog. I think. My younger sister is married and has a little boy and lives in the South. He has had a lot of health problems ever since he was born and now has a diagnosed learning disability. He's a delightful little boy but she is now a warrior mum that battles 24/7 to raise and educate him. The other married sister is 9 years older than me, but seems to do her best to forget about both me and mum. She has 2 daughters and a son, none of whom bothers to call or email though all of them received gifts and lots of attention from my mum when they were growing up. Yeah, I know, I know and I want kids? Doesn't make sense, eh? We are all radically different in our personalities and temperments.

2. My drink of choice used to be a shot of Jack Daniels with a beer back. This worked while wearing Italian cowboy boots.

3. My one and only black boyfriend dumped me cause I was a virgin. He taught me how to drive his station wagon. He became engaged to a white girl. They were both really nice people. These are true facts.

4. I hate bananas. I like banana bread, but I really hate the taste and texture of bananas. I don't even like them in a smoothie.

6. Don't really care for cats much. I respect them as creatures and wish all the best for them. I will pet them and talk to them and feed them, but I don't care to have one - or cat-sit.

7. I love road trips! Hubby and I have taken two road trips to Toronto. One across Canada and the other via the States. I saw Mount Rushmore and loved it - was totally blown away by its magnificence. Also American rest stations are superior in every way to Canadian ones. State troopers are scary looking. We camped during the Canadian trip with Sampson. The drive through Ontario was breaktaking! Poor dog, it was the hottest summer ever! But we enjoyed camping by Lake Superior. Poor me, the mosquitoes loved me - but I didn't complain once! Okay, I broke down in Kenora, Ontario and begged for an air-conditioned motel room. The mosquitoes in Manitoba and Sasketchewan make me fear for small children and pets.

8. I dream of owning a home in Bali, Indonesia. And this would be my bathroom. 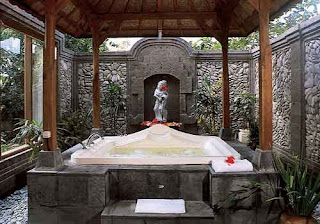 It worked it worked -- I have a huge smile and have totally forgotten about my aching abdomen!

Why is it that I feel like singing Mandy?

You have this amazing ability to write posts that make me stop and wonder at the world, make my heart ache, make me want to reach through the computer and hug you or they crack me up. This one had a combo effect ending with a good laugh.

WordGirl is singing Mandy -- I've got Copacabana running through my head now. Thanks, Deathstar...! lol

I've never been to the opera either. And I've driven to the west coast & back a couple of times with my parents (usually west on the Canadian side & then home through the U.S.). Amazing trip.

My mother is determined that dh will someday drive from Toronto to Manitoba, so that he can see just how far away it really is, lol.

And Saskatchewan mosquitoes. Believe me, it's even worse in the north. Up there it is ridiculous and the one time Manny and I camped up north we bought beekeeper nets to put over our heads cause they were truly that bad.

And when that's your bathroom, I'm going to come and live with you, ok?

If you move to Indonesia, can I come too? That bathroom is AMAZING!