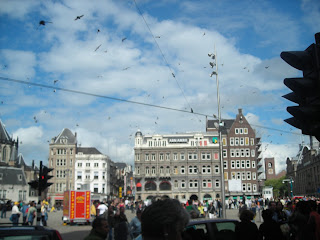 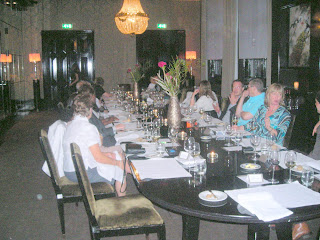 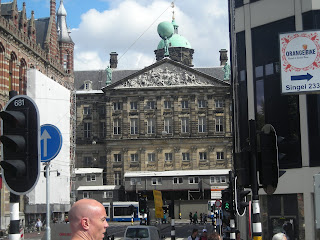 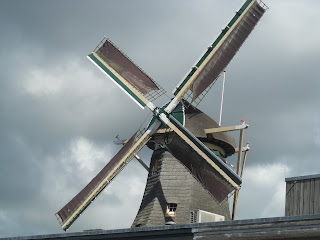 Walking around Amsterdam is a little like the game of Frogger - you have to jump this way and that to keep from being run over by cyclists and trams. I learned the Dutch curse word reserved for near misses. I don't know how people don't die in the streets every day. The cyclists apparently believe they have the right of way under any circumstance and don't even wear helmets. Not even the infants being carried in the front. There aren't a lot of cars downtown and in particular on the narrow side streets. As we walked around, we saw city workers activate traffic blocks that pop up from the ground - so as a car driver, how do you know which street you can go down at any given time? I suppose there is a system, I don't know.

I would look up every now and then and see a sign that depicted a mother and child crossing. Mmm, a sigh and then walk on. One day. You know, I often had the thought that I was glad I didn't have an infant along on this trip. I would have no idea of how I would have coped. Here I am, partying all night long, chatting to all these incredible people, sleeping in and trying to to gawk at everything, eat the food I want to eat, see the sites I want to see, have the sex I want to have. And yet I see people all around doing just that (not the sex part) with their infants and young children. And I think that I'm tired after 7 hours of sleep!

On the Friday evening, DH and I were invited to attend the family dinner. There's a picture above. It was one of those multi-course meals that seems like a good idea on paper, but honestly, most of the people there weren't used to waiting that long for their food. Including me. And when the soup course (sans the broth) was presented with just a couple of meatballs and vegetables, some people just started to eat it. I smiled gently at one man and told him that they were bringing the broth in separately. Honestly, why not just serve the consomme with the contents immediately? La-di-da. It was fun, though, cause there was plenty of time to visit and talk with people. Turns out that the people seated to the left of my husband were from the same town in England that he grew up in. They had been married for 34 years and they were still in love and grateful for each other. So while hubby was engaged with them I spoke with the groom's brother and wife on my side. I knew that they had undergone 2 IVFs before finally conceiving and giving birth to their little girl. The husband's English was very fluent so I spoke with him more. I didn't get too deep into the details, but I let them know we knew what they had gone through. He told me that he thought it was harder on the woman. We also agreed that the adoption procedure is not as easy as most people think. I wanted to talk more to them about it, but it wasn't really the time or place for it. Still, it felt like we shared a common experience that made us more .... connected on some level. And yeah, a thought fluttered into my head - why didn't I get lucky on my 3rd try or 4th try - but I pushed that thought away in to the dustbin where it belongs.

I think I only had one person ask me if I had any children - I just say no and ask them if they do. I don't elaborate, I don't even make a sad face anymore.

The bride's father was there with his two young sons and their nanny. These boys were so beautiful, it ached to look at them. They were perfectly loveable and so well behaved. It must have been something to be there with all of your children around you. Of course, I thought of my own father, absent from all of his daughters' weddings. Did they know how lucky they were?

Eventually, with dinner and speeches done, the very young and the very old retired and the hardy were left to polish off the wine.

The next day was the big wedding day and since it was such a big honking thing for me, I will actually post a picture of myself in the dress that gave me nightmares. I swear to god, I hope that I never spend that much time obsessing over another freaking dress again! My wedding dress was less of a hassle. Brother!
Cool thing: clean bathrooms in restaurants! This chandelier was in the bathroom of the hotel - isn't it fabulous? Maybe I should do that. I love a comfortable bathroom. In Amsterdam, it seems the floor to ceiling doors for toilets in restaurants are the norm. They are so clean and so cozy and private, you feel so relaxed!
Not cool thing: narrow winding stairs that lead to the bathrooms. I always had to hold on to the railing and there's not enough room on the step for your entire foot which is a little tricky with a swollen ankle and high heels. 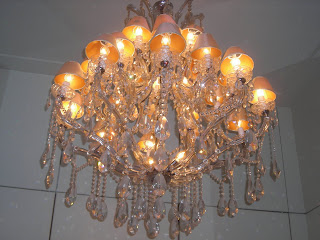 Posted by Deathstar at 9:24 AM

I've experienced the scary moments of trying to cross the street. Italy is like that too.

I really love fancy chandeliers. Their mesmerizing. I'm always trying to think of a way I can stick one in a bathroom, entrance, bedroom--anywhere...lol No luck so far :(