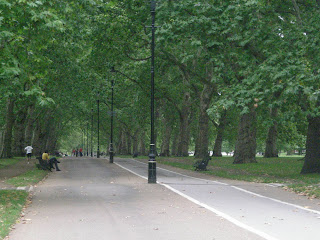 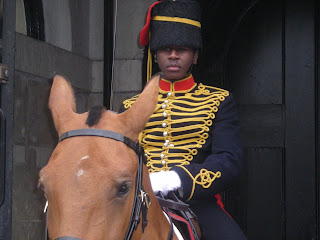 Okay, I'm back and have plenty to report on my European Adventure! We got back yesterday but we were exhausted after spending 13 hours travelling, so we fell into bed early.

First off, when we left for the airport for our departure, hubby said that because of his gold status from Air Canada we could check in a priority line instead of lining up. By the way, why do they make you go to those little terminals and check in through that and then do it again at the counter? Anyways, I thought, ooh, great, we don't have to line up with all those people. Once I took a look at our boarding pass, I said, "Seat 03, Seat 03, what's that all about? I've never sat in row 3 before!" And then I started squealing when I realized that it meant business class! Yay! That was hubby's surprise to me! He had been talking about how bad the flight was going to be to London all cramped up in economy. I had even brought snacks and a neck pillow, etc to try and make the journey easier. He had used his upgrade coupons (that he could have saved for business travel) so that I would be pampered.
Then we went to the Air Canada Lounge. Oh, free booze and snacks and magazines! Loving it! Then we boarded before the common herd and got champagne and orange juice! Huge comfortable seats that recline! Loving it! A menu and free flowing booze! Decent blankets and an amenity kit that had socks, cream and foot spray, etc. I tried to lap it up before we had to go to sleep. I have to say that in first class, the service is outstanding and they are even nicer to you than in economy. Why is that? We arrived in London and had to navigate our own way to the Park Lane hotel. That was a bit tricky by train and the Tube, but we did it. No wonder hubby warned me about bringing more than one piece of luggage. Then when we checked in the posh place, we were upgraded to a suite with a view of Green Park across the street. Smashing! Here's a couple of pics from the hotel. 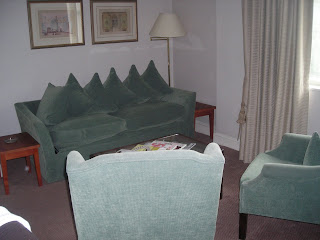 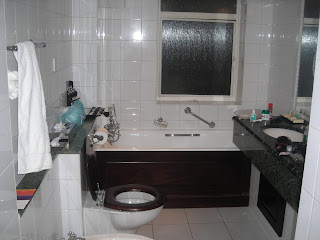 Then a view from the street outside: 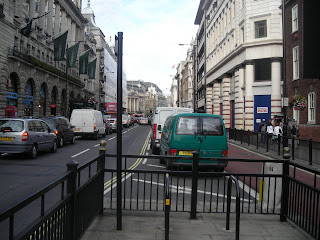 I couldn't believe it! We were in London together! I was so excited! We went down the street, bypassing my beloved Starbucks and went to Patisserie Valerie and had superb coffee and croque monsieur sandwiches. It's basically ham and broiled cheese on bread. One of the servers actually recognized my hubby from his previous business trip! Then off we went to get half price tickets to a show - The 39 Steps. We were pretty tired, but we wanted to stay up til 11 pm or so. We hung out at a nearby pub and then went to the show. It was hilarious! It's based on the Hitchcock film of the same name. The theatre was the Criterion in the West End. What a beautiful theatre! They even serve ice cream during intermission - how cute! Then we stumbled back home and fell into bed. 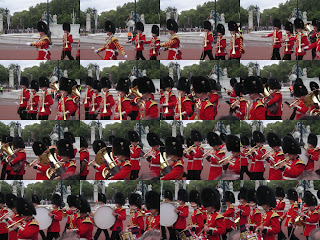 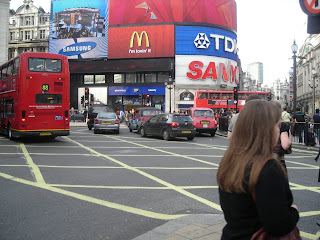 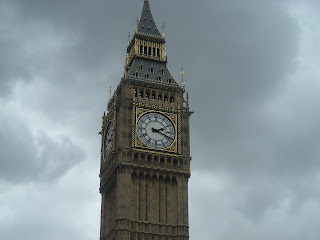 We saw 2 other shows, Spamalot, which was silly, but funny and A Brief Encounter, which was a little painful but inventive. We wanted to see Billy Elliot but it was full price and in British pounds, it's really expensive! Visited Harrod's, Tower of London, Trafalgar Square, Hyde Park, National Art Gallery and of course a visit to Northampton to visit my uncle and aunt. It was an emotional visit but well worth the trek out there on a Sunday. I did learn one thing - letting my husband do the navigating around the city was a huge mistake. He couldn't find his way out of a paper bag and he won't ask for directions! Grrr. I have to admit, the only times we get into trouble with each other while travelling involve getting lost while being exhausted and cranky. My ankle swelled up quite a bit due to the amount of walking and tripping over curbs. When I took over the reins, things went a little more smoothly. Still, it was fun and my only wish is that we were there longer. London is a very complex city to move around in, particularly by foot, and it does take a few days to figure things out. And just when you figure it out, you're gone. Favourite things: the theatre, fish and chips in the pub, visit with my uncle and romance in a swank hotel. Crappy things: getting lost, crappy weather, hot stuffy Tube trips and the worst Starbuck's latte I've ever had. I thank my bootcamp classes for giving me the stamina to negotiate the stairs in the Tube.
Posted by Deathstar at 12:44 PM

Yay to your hubby for the nice surprise!! I am impressed!! -- I just learned that Air Canada Jazz -- which we sometimes use to fly to my parents in Winnipeg -- is doing away with its lifejackets to reduce weight & save gas. They say we can use the seat cushions instead. Umm, no, I think I'll be flying WestJet from now on, thank you...!!

Boo on the not asking directions... but I must say, I think that's a typical male failing. ; )

Great photos, thanks for sharing!!

Loving reading about your trip! I am so jealous and always very happy you got to do this after grieving for your dear pet.

Sounds very fabulous - especially getting upgraded to business class. What a nice thing for your hubby to do for you!