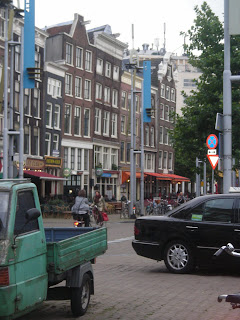 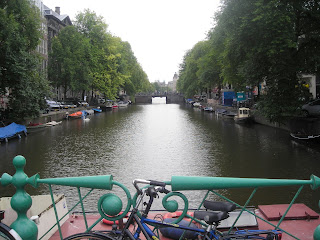 Now to Amsterdam - it was a whirlwind of activity. We took the train from the airport to downtown Amsterdam and then a cab to our first hotel - the SAS Radisson. Of course, the first thing you notice along the way are the hundreds of bicycles everywhere, on the narrow roads and chained to every railing you see. The hotel was very lovely, no pics of that - it was small, as are most hotel rooms in Europe, but clean. Odd that the window opened up into the atrium of the hotel. Little hard to get fresh air that way but what the hell. Cool thing - there was a trouser press and mini ironing board in the small armoire that held the TV and minibar. We just swung a compartment open and propped it up!

We checked in and then started to explore the area. We didn't go too far - you know our penchant for getting lost - and of course, right across the street is a "coffee" shop. The kind that has a certain odour emanating from it. They actually have a menu for marijuana. Apparently there are many different kinds and once you mention you're Canadian and from Vancouver, they know exactly what you want. Oh, I didn't indulge, but many a member from the Vancouver crew did. Get this - they have a glass enclosed smoking room for those who smoke it with tobacco. Whaaa???? It's mainly foreigners who indulge and it's banned in all other establishments. There's even a chain of shops called Bulldog.


Oh, to see the canals and the bridges and the side streets. So beautiful. Very much like London in that sense. The weather was pretty much the same - overcast, cool. I brought a lot of hot weather clothes that I didn't get a chance to wear, unfortunately. It's just as well, at least I didn't get all sweaty and miserable. It was hard to get our bearings as there are so many side streets that don't meet up with a major street. The best man for the groom, Xander (what a cool name, eh?) came by later to take us out for drinks and dinner and even he couldn't find the place he wanted to take us for dinner. His girlfriend, Tamara, joined us and she helped us out by circling certain places on our map for shopping and eating, etc. Almost everyone speaks English to one degree or another so it was easy to communicate with people. The young people speak a minimum of 2 languages! Not like us ignoramuses in North America. My high school French does not count.
I did notice that there are drinking places and eating places. The drinking places don't have much in the way of great food, and if you don't hurry along, you'll miss a good dinner elsewhere because a lot of restaurants don't serve food after 9:30pm or so.
Then after a couple of days, we moved to the College Hotel. The crew from Vancouver were treated to a free hote

l room for 3 days courtesy of the bride's father. Yup, he's loaded. Being that she has a very famous dad, I can't really tell you who he is or show his picture, or this site will be inundated by paparazzi spies. Seriously. I'm even reluctant to use the couple's name. So in future I'll call them Suzy and Sam, ok? The hotel is located in an established Jewish neighbourhood and you can't even tell it's a hotel from the outside. Apparently, it was allowed to open for business if it kept a low profile and the white shades in the bedroom windows were pulled down. It was dripping with modern style and hipness. There are more pictures on the website.

"Housed in a stunning listed 19th century structure, The College Hotel Amsterdam was originally built in 1895 as a school. The College Hotel and restaurant in Amsterdam pays homage to this scholastic tradition - the staff are all students of the Amsterdam Hotel Management School, Bakery and Tourism, working under the expert eye of experienced professionals."

After dinner, Xander took us to the infamous "red light" district. I was a little reticent but undeniably curious. I actually put on my sunglasses just so I could have a barrier between them and myself. As I've heard, they were actually on display, and you could see small neat mattresses and towels behind them. As expected, there were 95% men milling around and down the narrow side streets - shyly looking at the girls in the window fronts. I was surprised to see some incredible beautiful women in lingerie staring right back out. I thought any of these girls could have found suitable employment elsewhere or even decent men to take care of them. Xander did explain to us that prostitutes there pay taxes and have excellent health care, but Holland was having a problem with white slavery. Women were tricked into coming to Amsterdam and then forced to work as prostitutes. There was political pressure to weed that out. Strangely, I didn't see any black women, but that doesn't mean they weren't there somewhere.

We went to the Anne Frank museum the next day. I had to see that place. I read Anne Frank's diary when I was a young girl and it had touched me so deeply, that I knew that this visit was the only real "must". DH didn't know the story, so I filled him in on the some of the details. We had to wait about an hour to get in, but it was worth it. By the time we had finished, we were overwhelmed with emotion. True, it was a little depressing, but on the other hand, there were some inspirational moments as well. As much as there was so much evil going on, there were courageous and inspirational people who risked their lives to protect the Frank family. Buddhahood in the world of hell, I call it.

Later that night, Xander hosted a cocktail party for "Sam" and "Suzy's" friends. There had to be at least 30 people. Pink champagne, and rose wine were flowing. I don't know why rose is so popular in Europe. I really don't like it, I find it's too sweet after one glass. We knew a lot of the Holland crew as they came over to Vancouver to visit Sam often. I adore them. They were so loving and kind, so down to earth. It was an absolute pleasure to talk to them. I only wish I could have had such a loving group of friends growing up. Then out to an amazing restaurant for dinner. It used to be a church or mosque or something. They knew we were coming and it was catered, but true to Dutch service, it took forever for food and drinks to arrive. We didn't mind so much, it was great to hang out and talk with people. I'm sorry I didn't take pictures of the place, I just wanted to unwind and have a good time. We got to bed really late that night and then on Friday, there was the family dinner. More later.....


(Sorry for the formatting, I've been trying to arrange some photos, but Blogger is acting up.)

Posted by Deathstar at 8:20 AM

Welcome Back! Love the pics. Keep them coming :)