Show and Tell - The Golden Box 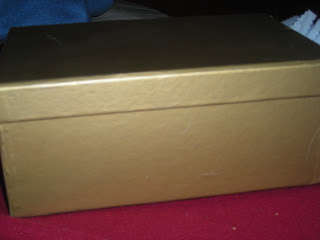 I missed the NaCoLeavMo because I was quite busy directing my show, etc, so I will do the Show and Tell thing. Of course, I will still comment as much as I can. (We closed last night. The show was great, the actors were terrific, well received, blah, blah, blah. ) This is my Golden Box. Not really remarkable. When we got married, I received a lovely present from a girl who was the girlfriend of a Buddhist buddy who was the emcee at our wedding. She is a pastry chef, and ensconced within was an ice cream scooper and a container of heavenly, homemade, chocolate fudge sauce. The sauce is long gone, but the box remains. I thought I would put a gift it in sometime and pass it along, but for some reason, I never did. I thought I could keep cards or keepsakes in it, but that never happened either. Instead, I put my grief in it. My disappointments, my humiliations, my despair. Just the worst stuff. The stuff I couldn't handle at the moment.

During my grief counselling, I was asked to put certain overwhelming emotions away until I could face them. She asked me if I had a place where I could put them. I had this empty golden box in my closet. So I put them there. I took it down, dusted it off and took a picture of it and then put it back. I like knowing that it's there. The fact that I put my nightmares in there meant that I didn't have to carry them with me. It could wait until I had some calm, some perspective. There's no real substance to them, it's just scary, hyperventilating emotions that serve no purpose other than to convince me that I'm weak, or stupid or incapable of being good enough.

I think everyone should have a box like this.

compartmentalization in action (not even symbolic but figurative) -- I love it.

and kudos on your show!

I actually love this idea and I think it could work quite well for me.

What a fabulous idea!!

That is a fantastic story. I wonder though what the next incarnation of the box will be--will it always be in the closet or will it be released or changed?

What a great idea. I'm into it. I have a leather Coach make-up bag that was given to me as a parting gift by my boss many years ago. I never used it for make up as I didn't want to get it dirty. I have never put anything into it and I think I just found a use for it! Perfect!

Stopping by from Show and Tell.

What a great story. I agree, everyone should have a box like this.

I've always liked the idea of this, but never tried it. Maybe it's time.

I'm so moved by this post and your golden box. Beautiful. Thanks so much for sharing this with us.

And thanks for your wonderful comments on my blog - you always make me feel connected and understood.

Congrats on your show!

I think I need a box car instead of a box, but I really like yours. It's nice to have a place to hold our grief until we can come back to it.