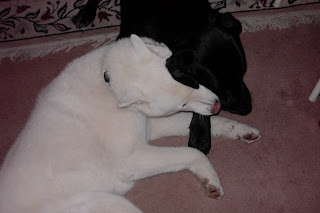 Went to the Pacific Spirit Forest (aka the UBC endowment lands) and had a memorial for Sampson. We kept putting it off for one reason or another, but I really pushed for it. I just needed to say goodbye and he deserved a good sendoff. It was a gorgeous day, just perfect. You could smell the earth, the green, feel the cool breeze on your cheeks. The sun shone through the trees. My best friend and her husband came and our friends, Jeff and Leanne and their kids and Sampson's longtime doggy girlfriend, Nikki. That's them chewing on each other. She had a picture of the both of them hanging on the dog's neck. DH found a sun dappled spot beside a trail. I wrote a short speech about what a great dog he was and all that he taught us. And then read the lyrics to the Pink song about losing a dear friend and then we spread some of his ashes. Tears streamed down our faces.
Leanne's little girl, 3 yrs old, kept asking where Sampson was. He had stayed with them last year and and apparently she was quite fond of him. They had told her he had died, but you know, she wasn't quite grasping that. She kept asking me and looking around for him when I told her he was there in the park. At one point, desperate for a way to appease her, I pointed up to the sky. She just looked up. 3 yr olds are literal. Okay, have to remember that. I then told her he was at Rainbow Bridge, which is apparently where beloved pets go. That gave her something to think about but I'll leave it to her parents to explain further. I wasn't about to tell her we burnt up his body and put them in an urn and that he was never coming back.
We shared stories about him and went for a coffee and a snack. DH played hide and seek tirelessly with the little girl, while the baby girl enjoyed a snack at her mother's breast. I always feel a tad awkward around small kids, torn between jumping into their world or having an adult conversation. I guess that split attention is something you have to work on.
For years, I would listen to parents talk about the funny things their kids did or said and I would counter with the funny things my dog did. Yep, sad, but it was my way of saying if I have to listen to your stories, you gotta listen to mine. Now I talk about waiting for the email, the phonecall, or how surprised I am at how expensive all the baby gear is.
One strange thing happened; that night we went to bed and DH closed the bedroom door. We started talking about how Sampson never liked doors being closed. He was always butting the door open to check on you. 2 minutes later, the door opens. We stare at each other. Then I say let's do it again and see what happens, that was probably a coincidence or gravity or something. So DH closes the door and 3 minutes later, the door opens again. We left the door open and said goodnight to Big Boy.
Posted by Deathstar at 8:51 AM

I believe they stay with us in their own way. I really do.

I'm thinking of you and Sampson -- picturing him romping and playing over that rainbow bridge.


Lovely photo by the way. They are such amazing and wonderful creatures, dogs.

I too make people listen to my dog stories when they share their kids stories.
Sampson was definitely visiting you!
My mom told my brother that our dear Golden Retriever Rusty who passed away 6 years ago sometimes visited her. She was thinking my brother would blow her off or act like she was nuts. All he said was "Tell him I said 'hi'".

ooh, I got chills about the door opening. night night big boy. so glad he head a happy sendoff. I'd have been bawling I'm sure.

it's been over a year and we still say good night to our pets. freaks we are, I guess. but it was our little ritual. she would climb into her bed and our old kitty would climb onto me and make little smacking sounds with his mouth while he purred us all to sleep, usually after a big heavy sigh from the pup.

my nephew-cousin was 3 when our dog died, and he didn't get it until he was 4, then it clicked. I wrote a post about it here:
http://lifefromhere.wordpress.com/2008/05/25/through-the-eyes-of-a-child/

and was that a 3 yr old nursing? interesting.

Sounds like a lovely afternoon. (((hugs))) And about the door opening -- I had something similar happen after the death of my grandmother.

I am so sorry for your loss.
I lost my dog of 15yrs last May.
It was (is) very painful.
I'm glad you were able to give him a lovely send off.

I can say this here because you won't think I am crazy. You know when you are kissing your pup on the nose/face etc each one has a certain scent? I can't tell you how many times I will be doing something, not thinking about the pups we have lost over the years and I will suddenly out of nowhere get a whiff of one of their scents, or feel them brush up against my leg. Nobody would be able to convince me that it was my imagination. They love us with complete unconditional love and I know they come back to check on us.

Though I have seen someone nurse a very big 4 year old, which was kind of creepy, but that's just my opinion.

Goodbye, Sampson. Glad you're still checking in on your people.

Glad you got a beautiful day to say goodbye to your Big Boy. I know he'll be in your heart forever. Wishing you peace and healing.

Goodbye dear Sampson. You are loved and missed and always welcome for a visit.
xo leah

Ceremonies such as you described are so beneficial to working out the complex emotions around loss. Your friends are good people -- nice to hear that were there to share in the tribute.

Good to know that Sampson is still looking out for you...

Sampson is still watching over you, it sounds like. What a great dog.

I can't imagine how much you must miss him.