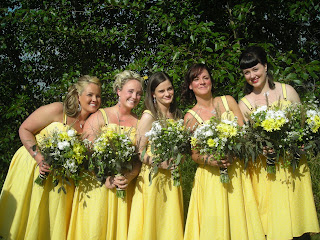 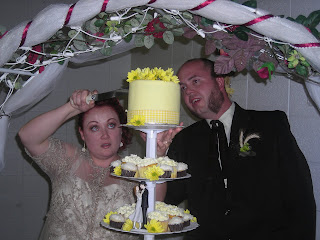 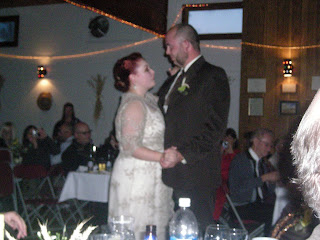 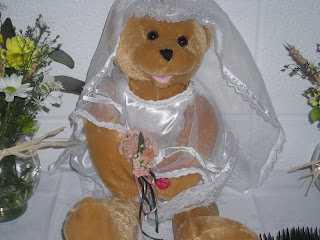 I've been officially red-necked! We flew to Edmonton this past weekend to attend DH's cousin's wedding. It was great fun! Now this was a DIY affair, no fancy schmancy for these young folk. They enjoy collecting vinyl records and pirate/cowboy/retro stuff. I adore DH's cousin. She declared that we were both "fucking hot!" When I first met her, she was 18 yrs old and sported a stuffed animal purse and an attitude. She is an only child and has got to be one of the most family oriented young person I have ever met. She's so loving and fun and spirited. Her chosen mate is no less as loving and genuine.
We went straight from the airport to the community hall near a lake to help decorate for the reception. We put together field flowers for the table settings, sheaths of honest to goodness prairie wheat and cowboy hats were placed on the walls, bales of hay were placed appropriately, etc and the drab hall was transformed with white and yellow gingham table runners and western themed signs. They worked so hard have the wedding of their dreams.
The ceremony was held in a grassy area by a lake and it was short and sweet. The bridesmaids wore yellow dresses and cowboy boots and the groomsmen wore western shirts. Later, at the reception, the meal was burgers (beware vegetarians, this is Alberta), corn, baked potatoes, baked beans and various salads. And booze. Lots of booze. I can't say I've ever been to a wedding where they have Jägermeister. The cupcakes were outstanding. Okay, I had a few. I have to eat salad and water for the rest of the year, I know. They had a band, can't remember their name, that was best described as cowboy rock. I didn't have a clue as to how to dance to it. However, since I did dust off my Italian patent leather cowboy boots for the occasion, I did my best to represent my race as I was the only black girl in the crowd. At least the gay guy knew who to talk to. You can dance to anything with enough wine in ya.
There were a few babies in attendance. People here actually have kids before the age of 30. Strange. One was about 3 weeks old and another was a delightful 11 month old who was happy to walk with anyone who would hold his hand. Of course, my MIL was all over them. And DH and the toddling tike got along quite well. They both had the same amount of hair so they had a lot to talk about. I've never seen my MIL happier than when she has a baby in her arms. Yeah, of course, it made me sad. But they say patience is a virtue. Ommmmm. Whatever.
The next day, I begged my husband to take me shopping. I was jonesing to just have bit of relative quiet but I only had an hour or so. I needed something. Nope, no babies were on sale, so I settled for a couple of workout tops. We came home with DH's nephew who leaves here to go back home in a couple of days. He also spent time with relatives from his Native half. Ah, the draw of your roots. How do you know who you are unless you know where you came from?
Now I've got to go shopping for some food - well food for them and WW frozen entrees for me. Yeehaw!
Posted by Deathstar at 8:06 AM

Sounds a lot like the backwoodsy weddings I grew up attending! Glad you had a good time!

Hoo-yeah! Looks and sounds like fun. Yellow is my fav color.

Yummm cupcakes! I have a cupcake addiction. One of many...lol It's the butter cream. Calls my name!